This movie looks like it’ll be way better than I initially thought. I’m going to try my best not to dwell too much on the who Ashton thing. I know people don’t like him, but I’m going to hope he can impress me like he did in The Butterfly Effect.

I’m kind of curious as to what will be better, this or “The Facebook Movie” aka The Social Network. I think it’s really awesome to have movies like this that give us insight into the lives of people who have achieved great accomplishments, but also to see the way that start-ups evolve. People like Jobs, Zuckerburg and even Bill Gates don’t become rich overnight. I find their journeys extremely interesting and inspiring.

I’m also most excited for the “nobody cares about typography” part. Well- I DO! I want to see how much emphasis they put on that issue. Not only did Jobs revolutionize the personal computer and the interfaces of the technology we use, but he also had a crazy impact on the typography we now know and love. Pretty cool if you ask me.

This trailer is a must watch if you’ve ever owned or played with Legos. The line up of voice characters includes Chris Pratt, Morgan Freeman, Alison Brie, Will Arnett, Channing Tatum and others. I thought the trailer was pretty funny, not hilarious by any means, but still pretty funny. I’m a fan of superheros as well, so I find it interesting that they’re being shown in their Lego form without the crazy kick-ass special effects. I was curious if this was going to be a stop motion film with the Lego, but it’s actually computer animated. I do like how they did sort of make it look stop motion-y in some details though, such as their body and  mouth movements. Pretty cool.

Check out the trailer above and stay tuned after that for the BeyondTheTrailer review with Grace. If you’re a movie lover (especially comic book related ones) I definitely recommend checking out more of her videos.

Being a comic book lover (and not just the comic book movies), I was pretty darn excited to see this trailer pop-up all over the internet. Check it out above if you haven’t already.

Have you noticed that comic book movies have taken a really dark twist this year? Man of Steel, Iron Man 3, Wolverine and now the new Thor trailer all have this deep, dark and dramatic feel to them. Clearly the comic-turned-movie franchises are taking some lessons from the Dark Knight Trilogy. These films look like they could exceed expectations solely because they’re evolving and learning from past mistakes. Just like real comic books, it’s not always about the action sequences, but first and foremost the stories, the relationships between characters and the characters themselves. Hopefully the days of crappy Fantasic 4, Green Lantern and Spiderman (the Tobey Maguire versions, especially 3… That was just terrible) are over!

I knew that they’d be showing a preview of this at the MTV Movie awards, but I was not expecting it to look this amazing. I was also expecting a 30 second trailer, but clearly I was wrong (thankfully). I’ve read the books and I’ve watched the first movie, and this trailer gave me goosebumps. It also made me want to raise my 3 fingers in the air.

I know a lot of people were looking forward to the trailer introducing some of the new characters, and I am a little surprised that they didn’t, but considering that this is only the first trailer, we’ll probably get to see them a little later this year in another one. If you don’t know the back story of this or haven’t read the books, I feel like the trailer might not have the same effect because of quite a few parts of the story left out. Either way, we all know this movie is going to do well, and if you liked the first one, you’ll probably like this one too. Too bad November is so darn far away! 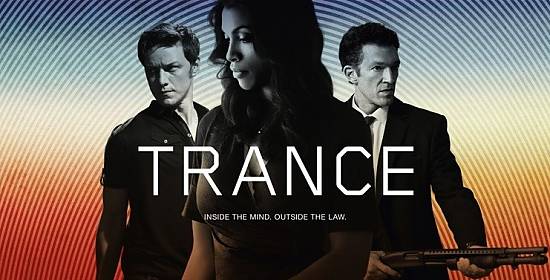 So last night I saw Trance with a friend who had a couple pre-screening passes. Trance stars James McAvoy, Rosario Dawson and Vincent Cassel. I have a huge soft spot for Mr. McAvoy, so from the time I saw the original trailer, I knew I had to see it. One of my favourite films that he stars in (and I know not everyone loves) is Wanted, with Angelina Jolie and Morgan Freeman. I had a suspiscion going into this film that it would have a similar feeling to that movie, and I think I was pretty on track with that.

The gist of the movie is that there’s a stolen painting, that gets stolen from the thieves, aka Cassel and company, and now the thieves aren’t too happy about it. McAvoy’s character, Simon is the only person who knows where it really is. Problem is he has amnesia and needs Dawson’s hypnosis help to uncover it. If that didn’t sum it up enough without spoilers, check out the trailer.

The movie was pretty intense overall and very action packed- and by action packed I mean lots of running, yelling and gun fights, (there’s no real hand to had combat in this one). The movie takes a few, actually quite a few turns and after I walked out I remember saying “What a twist!” but only because it felt like there were so many. If you see this film pay attention! I think that this would be a great movie to see the second time around too, because when you actually know the ending you can re-watch and say “Ah, okay, I see it now”. There were a few moments of shock value, including some gore and nudity and just the right amount of comedy thrown in too.

I liked it a lot. Not sure about my friend. Clearly it’s not going to be for everyone, but if you’re going to the movies this weekend or next anyways, I’d recommend it.

So first of all, this was pretty amazing and I was beyond excited when this showed up on my feed- But with all due respect to John Healy (the mashupper), if I’m going to be perfectly, honest I was a little disappointed…

I’m disappointed because I need someone to get Ron Burgundy with his flute doing an actual cover of this song. I think that would be completely satisfying.

If you love zombie movies or shows, watch this. If you love stuff that makes you feel emotions that cannot be contained and then they force their way out through your tear ducts, watch this.

Tropfest is an Australian short film festival (apparently the world’s largest). CARGO has made it as a finalist for this year’s awards, and by the way this film is blowing up, this might just be the biggest contender.

CARGO is about a man caught in a “Walking Dead” type zombie apocalypse. When he wakes up to a bite mark, he must find away to save his baby daughter.

Genres for this fest include, horror, drama, comedy and more and because they’re just so darn short, and so darn good, I could spend a few nights in a row scouring through these entries.